We made it into Cambodia through the most relaxed crossing we’d been through yet. There was no pushing from impatient tourists or queues of coaches, and I think the border crossing guard actually seemed happy to see two tourists crossing over such a quiet border on a motorbike!

We chose to head to Kratie first as we figured it would be an easier place to cross at than the capital city Phnom Penh. Kratie is a lively little fishing town, well known for their Irrawaddy dolphins. Of course we were excited at the prospect of seeing some wild dolphins, especially as it’s now thought that less than 100 of these dolphins currently inhabit this stretch of the Mekong river.

And we saw them! I was sure that we would be waiting ages just to see one fin, yet as soon as we descended on the river, we saw a whole group of fins nearby. I have a feeling this might be because we were the only boat on the river, because as soon as more boats joined us, the noise seemed to scare most of the dolphins off!

The only decent picture I managed to get of a dolphin!

We ended the day by dropping into the Mekong Turtle Conservation Center, which looks after ‘one of the world’s rarest and largest freshwater turtles, Cantor’s Softshell Turtle’. The center looks after the hatchlings before releasing them safely back into the wild. Located within the grounds of one of Kratie’s temples, it was a lovely place to drop into.

A further highlight in Kratie has to be the Phnom Sombok, which hands down is my favourite temple of my trip. If it wasn’t for the odd monk walking about, the place feels completely uninhabited and overtaken by nature. Situated on the highest hill in Kratie the temple gives you spectacular views of the town and Mekong river. And if you’re lucky, you may even spot a few monkeys hanging about!

Some of the many stairs we had to climb!

After a quiet couple of days it was time to head to the big city, where we were staying with one of my family friends who lives and works there. It came as a relief to stay somewhere a bit more homely and luxurious after so many nights in hostels and on overnight buses, and my friend Ged was eager to take us out and show us the sights.

Before coming to Cambodia, I was only vaguely aware of the Cambodian genocide, having heard of the Killing Fields from friends who had visited there. Visiting the Killing Fields and the Tuol Sleng Genocide Museum was a tough but interesting experience (as you’d expect). Both give you a very rich and detailed history of Pol Pot and the Khmer Rouge. I particularly recommend using the headphones provided so you can learn more about the genocide and hear the testimonies of the victims and perpetrators. It truly is an eerie feeling at the Killing Fields when you’re sat by a pretty lake and learning about the monstrosity that took place there.

Despite everything the Cambodian people have been through, Phnom Pehn continues to be a vibrant and lively city, and we enjoyed exploring the temples and central market. A personal highlight for me has to be watching the locals dancing in the big square every night and I’m gutted I didn’t catch it on film!

We decided to head to Kep before Kampot after finding out some of our friends Beth and John we’d bumped into at the beginning of our trip were currently there. It was great to meet up for food and drinks in the little town that is Kep.

While there isn’t a great deal to do there, we enjoyed a nice little hike in the national park, where we even spotted a family of macaque monkeys! 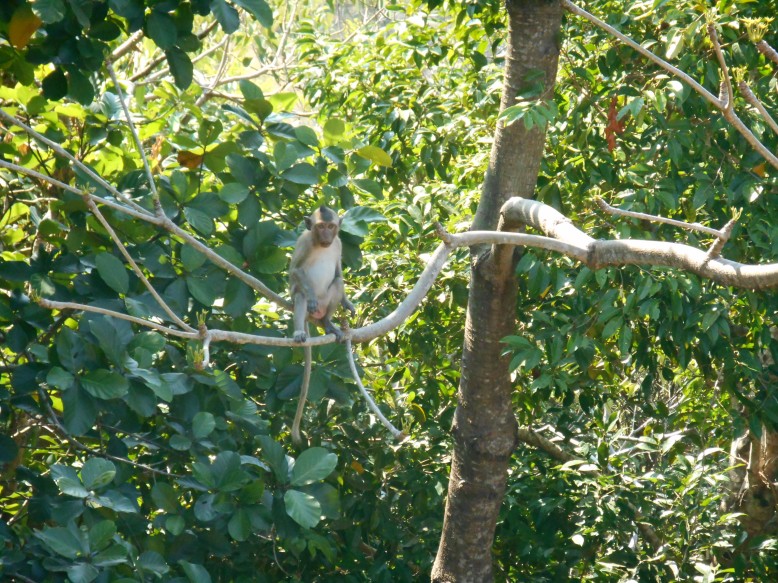 Baby macaque who popped out to say hello

Just down the road from Kep is the wonderful town of Kampot. After reading a few good reviews about it, we decided to stay in a ‘tent’ at a hostel, which was significantly cheaper than a dorm room. This actually consisted of just a raised mattress underneath a mosquito net outside in the garden. Although the view of the stars at night was beautiful to fall asleep to, the noise and bugs in the morning were quite a shock!

The main attraction in Kampot has to be Bokor Hill Station which I was desperate to explore. The eerie ghost town was once a luxury resort, before being abandoned in 1972 as the Khmer Rouge took over. The resort is big, so is definitely best explored by motorbike. Although everyone raves about the big abandoned hotel, I actually found the smaller, abandoned houses and the church to be way more interesting. Overgrown by nature, I’d find myself looking around one, before spotting another through the window, completely lost in the jungle! (See pictures here).

We spent the rest of our time in Kampot exploring the town markets and enjoying the cheap pizza and beer at a delightful new family-run restaurant which our friends had recommended.

By the time we reached Sihanoukville, we’d managed to catch up with our friends Stacey and Joel from back home, who had been travelling the same route ahead of us. They were working at Utopia hostel for free board, so we turned up and surprised them. The hostel is known for being a bit of a party hostel, and every night they have fire performers and cheap drink deals. It’s here where we tried the infamous Joss shot – a mixture of Vodka and Joss energy powder, which is apparently illegal everywhere but Cambodia, Indonesia and the Philippines. It’s safe to say that we had enjoyed a few eventful nights partying on the beachfront after a few of them!

There isn’t a great deal to explore in Sihanoukville, so it was nice to finally enjoy some relaxing beach time. We also paid to go on one of those inflatable obstacle courses on the sea, which I’ve always thought looked really easy from afar. Turns out – they’re not! Me and my friend Stacey spent most of the time sliding off into the sea while Joel and Edd raced their way around the course several times. Needless to say, it was a hilarious day.

After a few days together, Stacey and Joel left and headed to Siem Reap, where we’d agreed to meet up again in a few days. Me and Edd then heading to the port to visit Koh Rong island.

We’d heard amazing things about Koh Rong; rumours of untouched white sand and wild raves in the jungle. So it’s safe to say we were pretty damn excited to head there. As the island is so small, all the food and goods, (including ginormous blocks of ice), are carried over on the boat along with the passengers.

It’s hard to imagine that the island was once uninhabited, and you feel almost guilty as a tourist when you see the strip of restaurants, bars and hostels all built just for our use. But once we trekked through the jungle to Lonely Beach on the other side of the island, we could see what all the fuss was about. The sand is the palest sand you will ever see and the sea is crystal clear. I truly felt like I was in paradise. We decided to buy some snorkels, and we saw many different types of fish without even having to swim out far.

My favourite beach has to be 4k Beach, which is quite a walk down from where we were staying. There were hardly any people around, giving you a good feel for how the island may have looked before it was inhabited.

However, about two days in, I was finally struck by the dreaded traveller’s food poisoning! So instead of enjoying my last couple of days snorkeling and partying, I was spending them being sick and lying in bed. Apparently 8 out of 10 people get ill on Koh Rong, so I wasn’t entirely surprised. It’s a shame that I didn’t get to see the bioluminescent plankton, which appear in the sea at night around the island. It’s meant to be an amazing experience, so I’ll be sure to try and swim with them if I visit again. 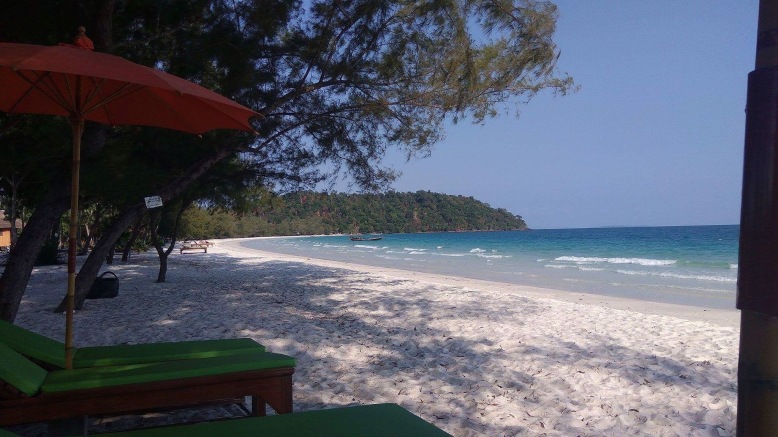 After an uncomfortable boat journey and motorbike ride, we made it to Battambang where we were stopping off for two nights on the way to Siem Reap. As I was still ill, I didn’t manage to explore the city the city as much as I would have liked.

But I did manage to get out of bed one evening so we could head to the bat caves, which Ged had told us about in Phnom Penh. Every evening at about 5.30pm, tourists gather around this huge cave to watch millions of bats emerge. This goes on for about an hour and it’s truly mesmerizing to watch all these bats flying over the paddy fields against the sunset.

All my photo attempts were terrible, so here’s a picture of the bats taken by Our Epic Adventure:

One motorbike trip later, we had reached our final stop in Cambodia: Siem Reap, home to Angkor Wat, the largest religious monument in the world.

We met up with Stacey and Joel again, and enjoyed a relaxing day in a nearby swimming pool. I also bought some antibiotics, which thankfully eased my symptoms straight away!

Our friends rented a motorbike to join us exploring a local temple and the floating village in Siem Reap. However, we couldn’t find a way of accessing the floating village without paying for further transport, and so we decided to head back. Unfortunately Edd and I crashed the motorbike after skidding on a truck’s water spillage and we soon found ourselves getting bandaged up at a local health center!

But we didn’t let the cuts and braises stop us from enjoying Edd’s birthday the following day, which we spent visiting Angkor Wat. Ask anyone who’s been and I guarantee they will have chosen to visit the temple at sunrise, as it’s meant to be the most amazing view you can get. We got up early, getting there just before 6am and the view was absolutely phenomenal. So if you’re planning on visiting, it’s worth dragging yourself out of bed early in the morning! 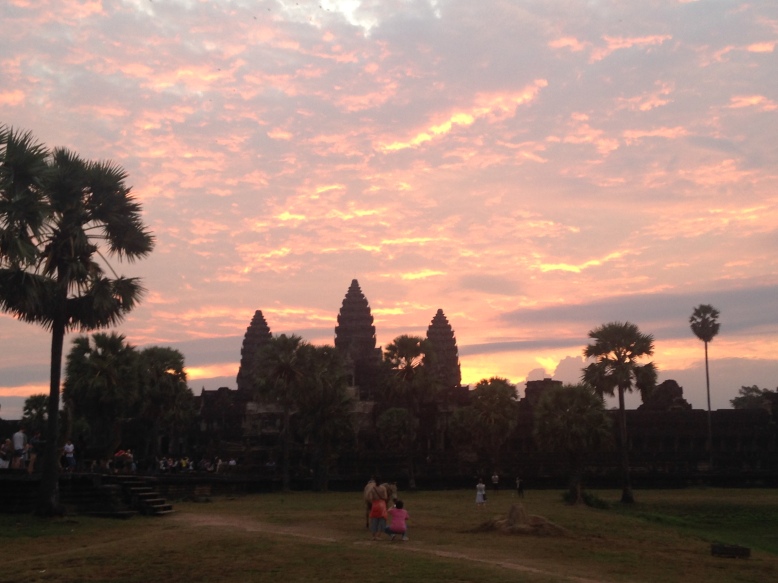 Angkor Wat consists of several temples spread out across a massive complex. We took our motorbike, which was really handy for getting between the temples, but you can also hire a tuk-tuk which will wait for you outside each temple before taking you to the next one. Our personal favourites include Bayon, also known as the Temple of Faces and all the jungle temples overtaken by enormous trees. I also love how there are so many monkeys roaming free around the temples; it really makes you feel as though you’re lost in the wilderness.

We finished off an amazing day celebrating Edd’s birthday on Pub Street; Siem Reap’s version of Khao San Road, where we met up with some friends we’d made in Koh Rong.

And then it was time to say goodbye to our trusty companion Sydney the Scooter, as we headed back to Thailand to do some island hopping!