What started off as an exciting and promising 2018 soon took a turn for the worse, as we sadly lost my grandfather, Bill Todd. While we all knew grandad was no longer his young and vibrant self, nothing ever quite prepares you for another loss, no matter how old or sick an individual might be.

I’m lucky in the sense that it’s now been nearly 12 years since I last lost a family member, and while it still struck me hard, I know I’m much better equipped to handle a loss than my 11 year old self. I also take comfort in the fact that my grandad was a lucky man, having met my grandma when he was just 15, celebrated their platinum wedding anniversary and met his first great grandchild, Alexandra, just less than a year ago. And at the grand old age of 92, I think he would agree that it was a life well lived.

I was nervous to attend the funeral, after recalling painful memories from the two I attended as a child. But we all shared wonderful memories of grandad and I actually learnt a lot about his life that I did not know before. For me, it’s hard to imagine a young Bill Todd when I hold such fond memories of hiding his slippers with my sister and cousin and the feeling of his bristly beard when he kissed us on the cheek. Yet at the funeral, I heard stories about an adventurous sailor, a practical and passionate father and a liberal man and husband, who chose to look after his children so my grandma could pursue her dream of being a social worker.

I’m so grateful that I got to spend so many years with my grandad and share such special memories with him. It’s also been so wonderful hearing from other family and friends who had been so touched by him. I’d like to end this post with grandad’s favourite toast, which he used to give at every family get together:

Here’s to us, to all of us, may we never want owt, noan of us, me neither! 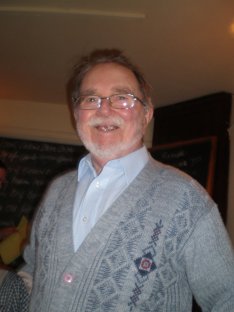