Knowing what my terrible sense of geography was like, my dad sent me on my way with a Lonely Planet travel guide, making me promise him that I’d do some research and not end up on the wrong flight.

I arrived in Bangkok in the late evening, and was already full of fear; what if I can’t find the hostel? What if I get mugged on the way? And what if some dodgy taxi driver drives to kidnap me?! But within minutes I was chatting away with my taxi driver and my nerves soon turned into excitement.

After a few failed attempts at teaching me how to say ‘thank you’ in Thai, we made it to my hostel, where I was reunited with my friend, who had already made a few other friends in the hostel.

Despite being exhausted from the journey, we soon found ourselves wandering down the infamous Khao San Road; a chaotic jungle of street vendors, bars and restaurants, selling everything from cocktail buckets and scorched scorpions to handmade ‘I love pussy’ wristbands and ping-pong shows.

Somehow the scorpions didn’t quite have the same appeal as the buckets, so we bought some mojitos before calling it a night!

After the mayhem of Khao San Road, we decided it was probably time to explore the sights, and prove to my dad that I wasn’t just going away to get drunk all the time.

I’d been told by friends who had been to Bangkok before that ‘it was a shithole, but a loveable shithole’, so it’s safe to say that my expectations of the city hadn’t been that high. However there are loads of wonderful things to see without venturing too far out of the city.

We splashed out on the Grand Palace Complex and Wat Phra Kaew, which the Lonely Planet insists is the must-see attraction in Bangkok. Both of course had stunning architecture (although you couldn’t get very close to the palace itself) but we found ourselves enjoying some of the smaller attractions much more.

It was a massive relief to be greeted by a calm and relatively empty Wat Pho/Reclining Buddha after the crowded palace complex, and the Buddha was overwhelmingly impressive in size.

Another highlight for us was the Golden Mount, which, situated atop Bangkok’s only hill, gave us a fantastic view of the city.

On our last day, we decided to have a break from the temples and visit the Chatuchak Market, one of the largest weekend markets in the world. The market is far bigger than I ever imagined and features several different sections, including food, clothing, pets, electronics and more.

We treated ourselves to some tasty fruit smoothies and street food before finishing off the day with a relaxing boat trip down the Chao Phraya river.

One overnight bus later we arrived in Chiang Mai along with several other travellers at 4.30am. Longing to get to our hostel beds, we hopped in a taxi only to find our hostel was shut for the night.

Unlike the streets of Bangkok where you can buy cheap street food until the early hours, Chiang Mai goes to sleep around midnight, so we resorted to buying a cheap pot noodle from a local supermarket.

The first thing I was keen to do in Chiang Mai was to get up close and personal with some elephants. As I was fully aware about the animal cruelty surrounding certain elephant camps in South East Asia, I specifically chose a sanctuary which didn’t offer riding and had good reviews online. I did the half-day tour, where you got to feed and wash the elephants before having a swim in a nearby waterfall.

It was wonderful to finally see elephants up close, however I can’t help but still worry about the way they’re treated, although the staff did seem very caring towards them. I think next time, I will do further research and choose one of the proper care homes where you just get to see the elephants wander around rather than taking part in the organised activities with them. 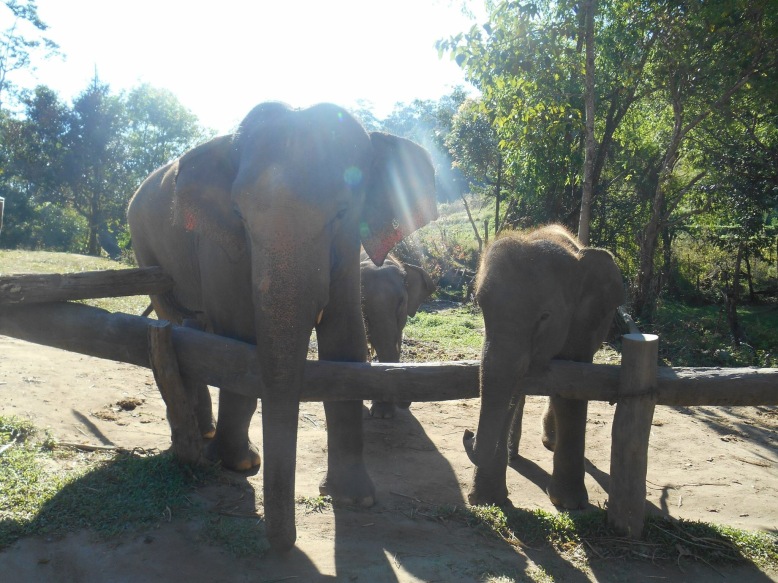 After a good night’s rest we visited a few local temples, including Wha Phra Sing, before stumbling across a beautiful park in the heart of the city. With pretty flowers and fountains everywhere, the park is a popular spot for yoga and we found ourselves surrounded by yoga and circus enthusiasts taking part in an acro-yoga festival.

Sitting next to the water, it was a perfect spot to enjoy a bit of afternoon relaxing and reading. 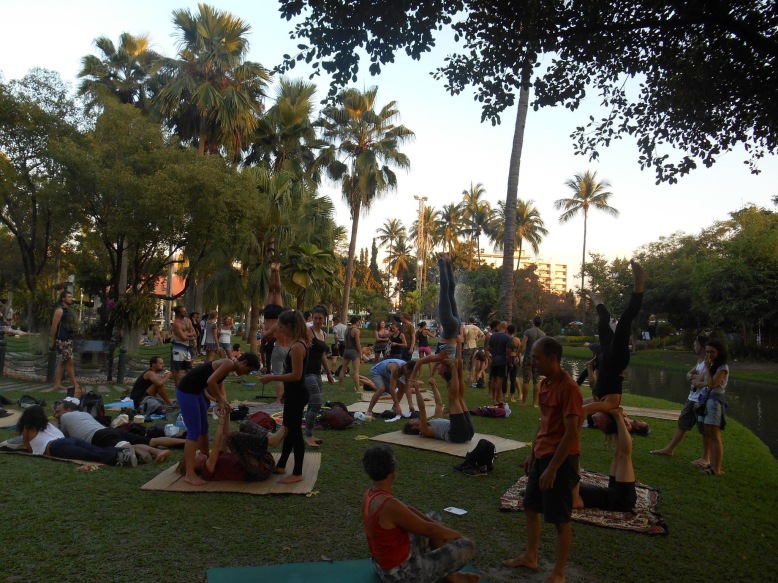 Desperate to get out of the city and into the countryside, we rented a scooter and drove out to the nearby nature park for some trekking and sightseeing.

On the drive up, we stopped off at the Phuphing Palace, next to the Wat Phra That Doi Suthep temple. While you can’t go into the palace itself, you do get to look around the beautiful gardens with the most colourful floral displays you can imagine.

The nature trekking trail led us to a fantastic viewpoint where we could really appreciate the vast size of the forest. We decided to cool off with a dip in a little waterfall pool we found, which was certainly refreshing after walking around in the heat! 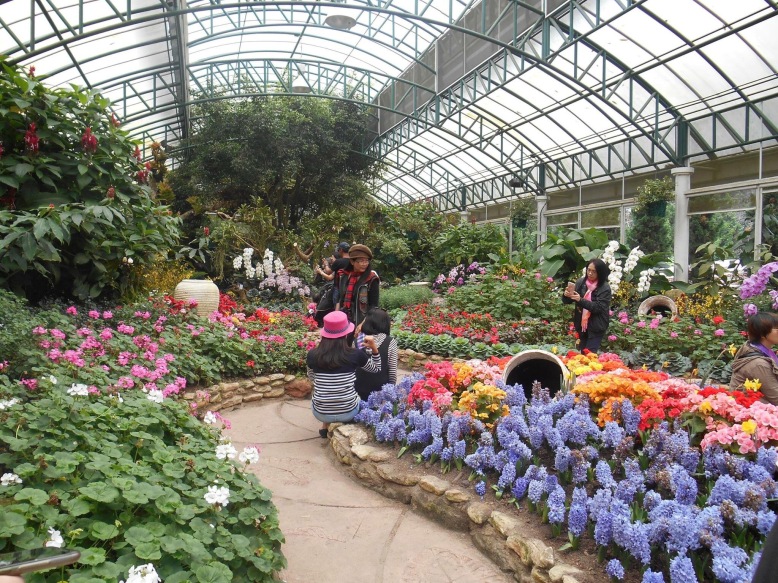 If there’s anywhere in Northern Thailand I was most excited to visit it was Pai. Promises of a hippy paradise did not disappoint, and as soon as we arrived we knew the windy and bumpy road journey there was worth it.

In Pai, it’s a popular choice to rent scooters and explore the pretty scenery around the small town, however we opted to just do an all day tour which included bamboo rafting and exploring the nearby caves, a viewpoint, hot springs and a waterfall before finishing off at the canyon to see the sunset.

I was surprised they managed to fit so many activities into one day, but it was a fantastic day from start to finish. Local tour guides took us through the caves, and although they couldn’t speak much English, they delighted in pointing out rock formations in the shapes of various animals like snakes, crocodiles and elephants. Our tour lady even giggled away after pointing out a rock that looked like a breast!

The highlight of the day for me had to be the hot springs and the canyon – the sunset was just beautiful.

The following day we moved hostel to the Famous Circus Hostel, where we were eager to meet up with some friends from Chiang Mai. Circus is the perfect hostel for relaxing in the day and socialising at night. It was great to finally get in a bikini and enjoy some sun by the pool – although I made the classic British mistake of getting burnt to a crisp on the first day. But it was nothing a little aftersun couldn’t sort out!

On our first night, we watched a fire show where performers did poi, staff and hula-hooping. Being a poi enthusiast himself, my friend  Edd performed some fire poi as part of the show as well.

Like Chiang Mai, the bars in Pai close around midnight, however one bar, Don’t Cry, stays open until the early hours. So most nights we found ourselves following the sea of glitter-clad travellers to Don’t Cry for some more drinking and dancing. 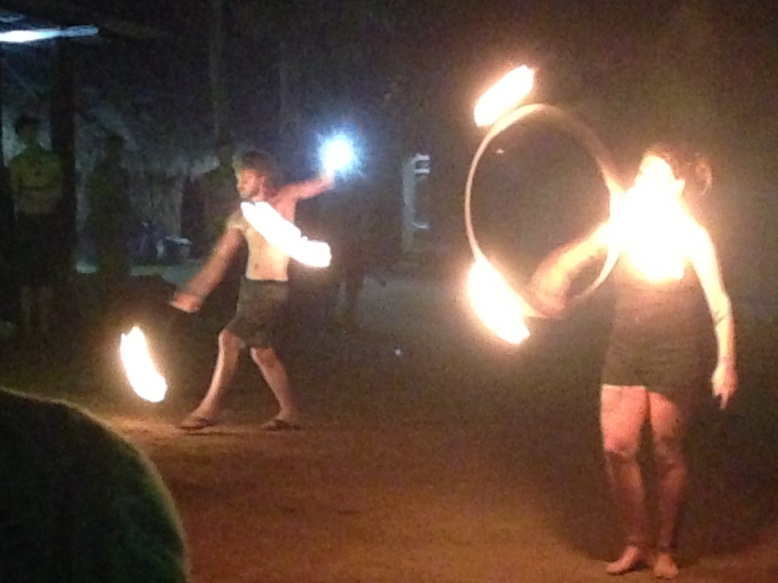 Pai was the perfect place to rejuvenate after the hustle and bustle of Bangkok and Chiang Mai and it is certainly my favourite place out of the three.

Although we only visited a snippet of north Thailand, it’s been the perfect start to my South East Asia travels and I’m already certain that I’ll be back here again!